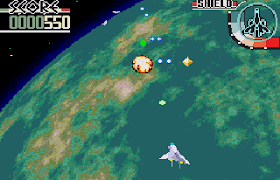 Genre: Action
Perspective: Top-down
Visual: 2D scrolling
Gameplay: Shooter
Art: Video backdrop
Vehicular: Space Flight
Setting: Sci-Fi / Futuristic
Published by: SEGA of America
Developed by: Game Arts Co
Released: 1993
Platform: SEGA CD / Mega-CD
A wonderful space shooter Silpheed, performed in polygonal 3D. Initially, the first version of the game was released for PC-8801 in 1986 and FM-7 in 1988. And later it was ported to Sega Mega-CD. The game was compared to Star Fox for Super Nintrndo, since it had a similar plot related to the cosmos, it was performed in 3D. And I left at about the same time. The game is very beautiful and on the extent of 11 levels is not boring. The plot in the game is quite familiar.
In the distant future, when the aliens visited the earth in about 3032, humanity made a significant leap. And I was able to colonize space.
The terrorist, led by Xacalite, hacked the main computer of the earth, which gave them control over all the space weapons of the solar system. The only hope of the Earth is a small space fleet beyond the reach of the computer, represented by the SA-77 Silpheed division.
10 Continues Code:
Play a Normal game until you lose and you only have 1 continue left. When the Intro Movie starts, press Right, Up, A, B, C, Left, Left, Down, C, A, Start. If done correctly, you'll get 10 continues!
‹
›
Home
View web version