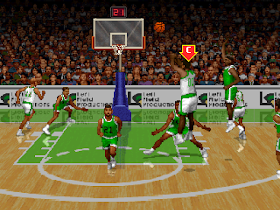 D-pad - the command of the ball;B - perepasovka;In + R - a sharp blowC - jump and impact;C, C - throw.You control the player over which the arrow hangs. Use B to switch control.

Evasion from foulsIf you earned a foul, press the P button until the computer counts it for your player. Replace the fouled player with any of the spares, and then press R. Now, the player who has been replaced will be given a rule violation.A player similar to ClintonNumber 34 of Atlanta is not really Don McLean from Washington. Take a closer look: this is the poured Bill Clinton, the American president.