Shadow: War of Succession (3DO) 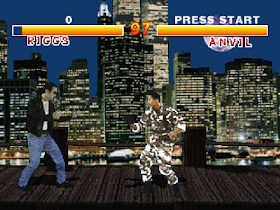 Genre: Action
Perspective: Side view
Visual: 2D scrolling
Gameplay: Fighting
Published by: Tribeca Digital Studios
Developed by: Tribeca Digital Studios
Released: 1994
Platform: 3DO Interactive Multiplayer
In those years, with the word Fighting, the players associated with two games is, of course, Mortal Kombat and Street Fighter. Unfortunately, the game console 3DO Interactive Multiplayer game Deadly Battle never appeared, although it seems like it was planned. This immediately took advantage of some game developers, such as Tribeca Digital Studios and released the game Shadow: War of Succession. The game can be called the shadow Mortal Kombat, as it tried to recreate everything from MK, but where they are to the legend. All the same digitized characters, various combos, "use of magic", teleportation, and the likeness of Fatality. The game has eight characters: Riggs, Gabriella, Anvil, Viper, Erika, Sasha, Carlos, including one secret character Shadow King. Two of the characters are sexy girls, an explicit reference to Milina and Sonya.
In Japan, the game was released under the name: Shadow Warriors.

The main mistake of playing in SHADOW is a vain desire to quickly press the buttons of special moves. It's not at all necessary to hurry. Special movement will be properly worked out, even if you press slowly, with the placement.

Hellfire (Hellfire) - ⇦, ⇨, A;
Rotation ("Roll") - ⇨, ↓, ⇦;
Disappearance ("Disappear") - ⇦, ⇨, R;
obsession ("Ghostly") - ⇨, ⇨, C;
Rigz is the best fighter of the game after Viper. Conveniently, the reception of "disappearance" causes almost the same buttons as "hell fire". A good combination is a flying kick plus an uppercut with rotation; the enemy immediately has a lot of problems.

earthquake ("Groundshake") - ↓, ⇨, ⇦, R;
Disappearance ("Disappear") - ⇦, ⇨, R;
grenade ("Grenade") - ↓, ⇦, С;
Knife (Knife) - ↓, ⇨, A;
sliding ("SHde") - ⇨, ⇨, C;
Viper-Viper is the strongest fighter. He is fast and has a lot of deadly "combos". In the "flying kick", remaining in the air, he manages to inflict a couple of high kicks to the opponent, and then finishes him with an uppercut. Another effective combination is slip, slip, uppercut and throw.

If you have in mind to fight with the final "boss", then start the game on the difficulty of "Hard". Otherwise, the boss will not condescend to meet you.

The enemy can be killed by entering the following combination on the complexity selection screen: ↓, ↓, ←, →, ↑, ↑. Then, during the fight, press LShift.
‹
›
Home
View web version