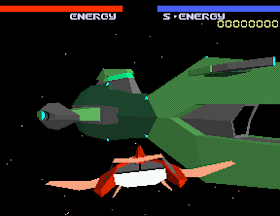 Genre: Action
Perspective: 1st-person, 3rd-person
Gameplay: Shooter
Setting: Sci-Fi / Futuristic
Published by: SEGA of America
Developed by: SEGA Enterprises Ltd.
Released: 1995
Platform: SEGA 32X
Space shooter, completely in 3D style. The player takes control of one of the spacecraft like in the game Star Wars Arcade or Star Fox. You can either look from the cockpit of the space fighter from the first person, and take the camera off the ship, getting a third-person view. In the game there are a lot of different tasks that you have to perform, mainly this is the destruction of other space ships, large and small. At the edge of the galaxy, chaos breaks out. The sinister ruler is beginning to build a powerful solar ray. One of the best fighters (Scramble Fighters) division Shadow Squadron must perform a difficult task, he has to fly to a solar laser, that would destroy it otherwise it will be - Shoot.
In Japan and Europe, the game is more known as Stellar Assault
‹
›
Home
View web version