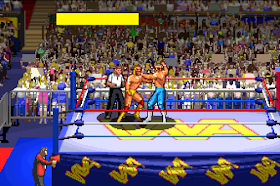 Genre: Sports
Perspective: 3rd-person
Gameplay: Fighting
Sport: Wrestling
Published by: Natsume
Developed by: Natsume
Released: 1996
Platform: 3DO Interactive Multiplayer
Wrestling is a brave sport. And more insane. Mmm... let me think... well, perhaps, mindless sometimes. Aha. So ... And then there are still mugging peasants, in principle. Yes. Here. " That's better. And the poor, often. If this is of course not WWA or TNT. But it's all about the very same wrestling that televisions and monitors broadcast to us, whereas real wrestlers often sound like gay porn.
Hmm, what am I talking about? Oh yes! Today we are reviewing a game designed to carry the hard truth of muscular showmen to our favorite console. The only one of its kind. Japanese.
But for a start, as usual, you need to tune in and prepare. In the minds of every decent Russian made in the USSR, the first word of this review always evokes memories of the cult TV channel TNT, which was hosted by Nikolai Fomenko. The Russian is younger - about the transfer of the STS channel, with poor commentators and lengthy lyrical digressions before the battle. But anyway, many of us love this show just for the fact that it's a great show. Hulk Hogan, Kevin Nesh, Goldber, Sean Michaels, Rick and Scott Steiner, Rick Fleur and others and others. Battles in cages, with the help of tables, crowds of fans, verbal fights of famous fighters and children with body painting in the spirit of Sting Remembered? Forget it. Here everything is different. Money for licensing was not enough.
le obviously catches your eye. We will not try on pink eyepieces - it is terrible and intolerable. Despite flirting with the scaling of sprites, and maybe thanks to them, the riot of pixels on the screen makes you remember the wonderful games of the era of the early nineties. Here you do not SEGA Genesis, everything is much more fun. Here, harsh, tightly knocked down from a couple of dozen pixels fighters walk around a small monophonic square ring and beat each other that there is a fool, trying to knock out frames of the animation. Wasted. The animation of the blows recalls the memories of the mustache of old Mario. Tom himself, who is on the NES.
The second glaring drawback of the game is the absence of a license. However, this deplorable fact is expressed only in the names of local Peresvet and Chelubeev. Their appearance, habits and crown strokes were carefully transferred to the game. And we quickly find out the name "Golden lips" for old Hogan, "Andy Savage" turns out to be Randy by the same name, Underdise Morgan - The Undertaker, and so on. Here it is worth mentioning the number of fighters to choose from: It is unprecedented for wrestling simulators of those days and in general fighting games on 3DO. We offer an assortment of 30 (!) Selected brutal males, divided into 3 categories according to wrestling associations: WWA, JAW and MDLL. And if the first is more and less clear, the other two represent the Japanese and Mexican fauna.
Click the first available option, click New Game and select the desired lump of pixels and click start. On the screen there is an intro of battle with a funny slideshow. Do not worry, all the shots are repeated. And now attention: here the main thing is not to break. Before the battle, in the best traditions of this sport, there are mutual threats of wrestlers. And they sound like Japanese voices.
You will say that the game is terrible, you will break the disc, burn it and dance around the fire? And you will be wrong, gentlemen and ladies! Of course there are products that are rotten and unfit for consumption, but my keen eye has got used to finding good sides for practically hopeless samples of igrostroi. In this case, these advantages are diversity and the gameplay itself.
To back up my words, look at the game next. In addition to 30 characters with the potential to be under the control of the player, we have 4 game modes: career, tournament (reminiscent of the playoff of any Fifa International Soccer), simple versus and working off the basics of the fight. Also, we have to choose from as many as 4 arenas for holding the Sich and one for training. But that's not all! Acquiring (downloading / borrowing - it's necessary to emphasize) the game you get also a set of super-attacks peculiar to one or another wrestler, and super-drums are possible in both single and team. Such a buzz can be broken into two by the opponent, while the referee throws out the second opponent from the field. And all these little joys, along with the commentator, create a very truthful atmosphere of the very Wrestling who looked at us from TV screens at the end of the tumultuous nineties. More truthful than the same Wrestlemania.
‹
›
Home
View web version