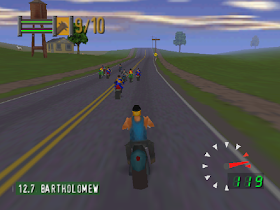 Genre: Action, Racing / Driving
Perspective: Behind view
Vehicular: Motorcycle, Street Racing
Published by: THQ
Developed by: Pacific Coast Power and Light
Released: 1999
Platform: Nintendo 64 (N64)
Thanks to this game, I finally learned a very important rule: you can not judge a game only by its appearance. By the way, only after I realized this, I managed to force myself to play games for the old, little-known and weak in the graphic plan consoles. And what did I find? On MSX2 and Game Gear were revealed two parts of the magnificent game Aleste, on the same Game Gear there was a smart Aladdin. So, I'll be back, in fact, to where I started. As soon as I started this jamez and saw the incredible turbidity of the texture, I turned it off in horror, and did not include more than two months.

And in vain, very vain. After all, for poor, muddy textures, there is simply magnificent music, selected from the compositions of young punk bands, to listen to which is a pleasure even without the game itself. The Pacific Coast P & L development team obviously did not have the money to put the tracks of well-known teams into the game, well, there are all sorts of Offspring, Sex Pistols, Guns'n'Roses, after all, they all would have to pay very, very nonshile amounts. But whether the game has lost from this? By no means, the patted "old men" have been replaced by youngsters, who play extremely lively music, which adds a lot to the drive game. By the way, in general, the races for Nintendo64 rarely exceed eight megabytes in size, so why does the Road Rash 64 weigh 32 MB? The answer is simple music, there are about nine songs in the game, most of which with vocals, for H64 is an excellent indicator.

Although without music, the game would be fun. For those who do not know about what is at all in question (well, the man decided to live for a couple of decades in a sound-water-light-proof bunker) I will describe the essence of the game. This is a race on motorcycles, first as usual we buy an old and dohlenky "motik", and we ride it on various tracks, with other drivers, if we drive well, we get money that can be spent on a new bike. At first glance, everything is simple, but not all a bit more complicated. In fact, along with the motorcycle, we get also weapons, which can mutuzit their opponents and policemen, well, they in turn will start to mutate us.This is what the gameplay allows, and now I'll tell you about the innovations, concerning the first three parts of the released for the console Sega Genesis, which in fact are quite small.The first thing that really catches your eye is the behavior of rivals. for example, in the second part, the races ki stretched along the track in a line of lines, and each separated from each other with a good ten meters.And in the "64" part of this series reigns merry buffoonery, even if you overtake all competitors for a good hundred meters, then after two hundred meters, you There will be at least three rivals breathing in the back, oddly enough, but this does not only affect the gameplay positively, but is very positive, because all the rivals are nearby, and it's easier to hammer them (you, by the way, too, believe on Mother Earth will be provided regularly). In this heap, it is sometimes difficult to find oneself, not that ... The second difference that catches your eye is the missing intersections, on which it was very easy to crash into a passing car. And although the machines themselves remained, the probability of a collision with them was reduced to almost zero. Strictly speaking, nothing in the eye rushes, except for graphics.

Yes, the game was transferred to a new engine, the buildings, the trees, all the racers and their motorcycles became 3D, but. all this creates a depressing picture: the drawings on the biker jackets are blurred so much that it is unclear what is generally drawn there, during the "free flight "bikers you will definitely see their faces, so here I give the technical characteristics of the face textures:
Eyes - 2 pixels;
Nose - 3 pixels;
Mouth - 5 pixels.
Well, let's go further, the animation in the game is present in only two or three points: when the Persian waves the stumps, when he jerks off with his feet, and when he falls. The first two actions are pretty bad, but you can still look at them. But the fall ... it is worth describing in more detail, imagine how the Persian is sitting on a motorcycle? So when he flies out of the saddle, his body does not change position, only begins to rotate at a frantic pace, at first it was surprising and suggested a bug, but when you realize that "it's so and should be" you are horrified, even on The Sega Master System falls more smoothly. The whole thing could be saved by the competent level architecture, but it did not save, but only finished off the game. I do not even know how to call it, when all the routes differ only in the length and the number of turns, the whole game we go on the asphalt laid along the "green desert", from time to time calling in cities where no one walks the streets. Here, willy-nilly, the first parts of the series are remembered, where chic landscapes always grew along the edges of the road. By the way, the game in general is quite gloomy, although the race takes place during the day, there obviously is not enough mission Hawai from Road Rash 2.
‹
›
Home
View web version