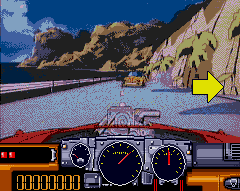 Genre: Action, Racing / Driving
Perspective: 1st-person
Art: Anime / Manga, Full Motion Video (FMV)
Gameplay: Arcade, Timed Input
Published by: Renovation Products
Developed by: Data East Corporation
Released: 1993
Platform: SEGA CD / Mega-CD
At first glance, it may seem that this is a race. But this is an interactive video, in which you at some point have to press the desired button, which will be displayed on the screen as in Dragon's Lair. You have to play for a policeman who avenges the gang for the death of his lover, driving around in a luxurious red car. You have to race at a breakneck speed, performing various tricks. And, of course, at the same time smashing cars of enemies. Do not confuse this game with Road Blasters for Sega MegaDrive / Genesis, the games have virtually nothing to do.
The game is quite common: gaming machine (original), MSX, Sega CD, Playstation, Saturn, VHS (yes, interactive video), Sharp X68000 (the most interesting port was made in 2009!), LaserActive, iOS. 3DO also planned a game, but it did not come out (called Turbo Blaster).
‹
›
Home
View web version