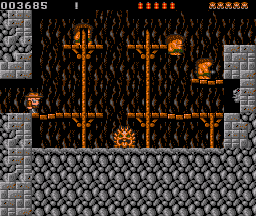 Genre: Action
Perspective: Side view
Visual: Fixed / Flip-screen
Gameplay: Platform
Published by: Chilly Willy
Developed by: JLF65
Released: 2011
Platform: SEGA 32X
In 2011, Chilly Willy, also known as JLF65, decided to make the port of the game Rick Dangerous for the Sega 32X game console. Previously, he already did the Wolfenstein 3D and Wolfenstein 3D game ports: Spear of Destiny for the Sega 32X gaming console. In the same year appeared Rick Dangerous for Sega MegaDrive / Genesis. He decided to name his project xRick. For development, he used Simple DirectMedia Layer (SDL) and zlib. The port is a full-fledged new game for the Sega 32X. Rick Dangerous appeared long before Lara Croft Tomb Rider. And it was created, most likely, thanks to the film about the adventures of Indiana Jones. The game has been on a variety of platforms and systems Atari ST, Windows, Linux, Amiga, BeOs, QNX and others.
British agent Rick Dangerous had a difficult task in the jungles of South America, his goal was to find the lost tribe Goolu. But by an unfortunate coincidence, his plane crashes, and now he has to survive and escape from the Gulu tribe. He also will visit the Egyptian pyramid full of mysteries and traps as well as in the castle and futuristic rocket base. Rick is armed with a pistol and a baton. He also has dynamite with him. He together with you have to solve not difficult riddles, that would pass the levels, which are filled with various traps and obstacles.
‹
›
Home
View web version