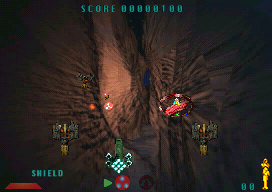 Genre: Action
Perspective: 1st-person
Gameplay: Rail Shooter
Setting: Sci-Fi / Futuristic
Published by: Taito Corporation
Developed by: High-Tech Lab Japan
Released: 1995
Platform: 3DO Interactive Multiplayer
Pyramid Intruder is a "rail" scrolling shooter using FMV for the 3DO game console. The game takes place in the distant future. On one of the planets in the universe there is a pyramid, in which we need to get through and fly through its labyrinths. At the same time, destroying opponents, collecting bonuses, while trying to survive and fulfill their task.
It turns out that the pyramid is well guarded so that be careful.
‹
›
Home
View web version