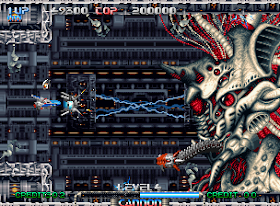 Genre: Action
Perspective: Side view
Visual: 2D scrolling
Gameplay: Shooter
Setting: Sci-Fi / Futuristic
Published by: SNK Corporation
Developed by: Aicom Corporation
Released: 1995
Platform: Neo-Geo
The Holy Grail of horizontal shooters for Neo Geo, and not only. High price, a rarity and, as a consequence, a cult status. The reason for this - over beautiful graphics and "correct" complexity. Being actually a clone of the famous R-Type, the game managed to remain very distinct. However, without borrowing, of course, was not done. It is worth noting one, a very remarkable fact. The soundtrack playing at the third level is called Prominence, just like in LifeForce. I wonder why, is not it? Quite slow, but requires a tactical approach to the gameplay. Various levels, predatory enemies, huge bosses, and all this under a somewhat inappropriate, but cheerful music (OST available, SNK clearly observed its own traditions). Play, you can not miss. The comma is delivered correctly, in the right place. By the way, Pulstar was developed by a little-known, but impressive in its track record "Aicom". Vice: Project Doom, Viewpoint. The people from Irem knew a lot about good, and most importantly - beautiful games.
‹
›
Home
View web version