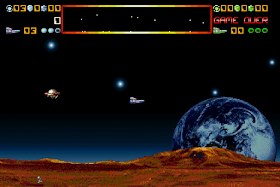 Genre: Action
Perspective: Side view
Visual: 2D scrolling
Gameplay: Shooter
Setting: Sci-Fi / Futuristic
Published by: Songbird Productions
Developed by: Bethesda Softworks LLC
Released: 1999
Platform: Atari Jaguar
Game Protector: Special Edition for Atari Jaguar is an improved version of the game Protector. The game is very similar to Defender 2000. The game belongs to the genre of Shoot 'Em Up. The version of the game Protector: SE was significantly improved and released around 2002 for fans. Of the features distinguishing the game can be noted the presence of a level card, which is quite unusual for such a genre of games. You also continue to fly forward, with the ability to turn around and destroy enemies. You can improve weapons, etc. The game supports a mode for 2 players.
‹
›
Home
View web version