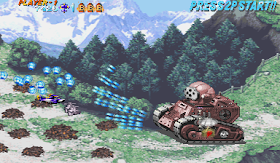 Genre: Action
Perspective: Side view
Gameplay: Arcade, Shooter
Published by: Capcom U.S.A.
Developed by: CAVE Co.
Released: 2001
Platform: Arcade Machine
This game is listed as a horizontal-scrolling shooter. Volumetric 2-D graphics, bright colors, a living environment. There are 2 pilots to choose from, each of which controls its type of aircraft with different firepower, in addition to this, also the type of auxiliary weapons, there are 3 of them, which are also controlled by someone. At levels full of power ups that give you such opportunities for improvement that you literally water enemies with a fiery wind, in general you annihilate everyone. The game is pretty cinematic, bosses do not emerge from nowhere, and this is facilitated by some event, and his death (the manager of a giant machine) is also interestingly framed, which looks pretty beautiful.
The original first part of the series "Double Dragon" from 1987. The beautiful Marion is kidnapped and the Li brothers are sent to rescue her. For its time, the game has an impressive variety of techniques: in addition to standard punches, leg and jump, the characters have a header, an elbow, the ability to take enemies into the capture. A small slowdown / acceleration when changing the number of enemies can easily be forgiven, given the year of release. Good game.
‹
›
Home
View web version