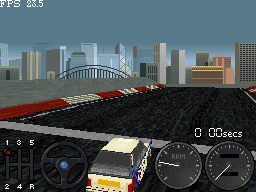 Genre: Racing / Driving
Perspective: Behind view
Gameplay: Arcade
Published by: Elite Systems Ltd.
Developed by: Maelstrom Games
Released: 1996
Platform: 3DO Interactive Multiplayer
The Powerslide game is a prototype of the 3D racing game, which in its time never came out on Panasinic 3DO. The game is due to its appearance on the console team OlderGames, it is thanks to their efforts the game was released in 2007. The game has several tracks and characters to choose from, there is a mode for 2 players. Particularly interesting game is not nothing stands out. In 1998, under the same name came the game and for the PC, it was a race in the post-apocalyptic world, but it has nothing to do with the game for 3DO Interactive Multiplayer.
‹
›
Home
View web version