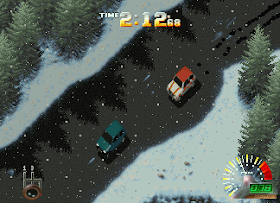 Genre: Racing / Driving
Perspective: Top-down
Published by: Time Warner Interactive
Developed by: Rage Software Ltd.
Released: 1995
Platform: Atari Jaguar
Power Drive Rally is an excellent Rally simulator, belonging to the genre of racing. The game is performed in a beautiful 2D, with digitized 3D models of cars and an isometric view from above to the track. At first it may seem that this is an extended version of the 16-bit Power Drive game for SMD and other systems, but, rather, it is a full-fledged continuation of the excellent racing simulator. Initially, we are given one of two cars from group N: Mini Cooper S and Fiat Cinquecento. Later, after the passage of the seasons, we will have the opportunity to ride on a few more cars Vauxhall Astra 16V GTi or Renault Clio Turbo and Ford RS Cosworth or Toyota Celica CT-4. Rolling on these machines, we are in different parts of the world: England, Arizona, Italy, Finland, Kenya, France, Corsica and Sweden. Each race is unique in its own way and takes place under different weather conditions: snow, rain, mud, night with lights on, etc. At the same time, the car behaves accordingly, with rather realistic physics. Warn us about the coming turn, we will be the arrows or the voice of the navigator. For every race you win, you get money for which you can repair your car. I especially want to note that the game is very beautiful and detailed graphics. The water reflects the clouds that move, etc.The game is also called Powerdrive Rally.
‹
›
Home
View web version