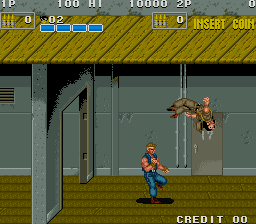 Genre: Action
Perspective: Side view
Visual: 2D scrolling
Gameplay: Beat 'em up, Shooter
Published by: SNK Corporation
Developed by: SNK Corporation
Released: 1988
Platforms: Arcade Machine, Nintendo (NES)
The player performs the role of a prisoner of war under the pseudonym of Serpent (Bart in the version for NES). His task is to escape from captivity, penetrate the enemy's base and destroy his leader.
At the beginning of the game, the hero attacks opponents with his hands and feet. Subsequently, he can find brass knuckles, knife, body armor, grenades and machine gun. The game consists of four levels.
In the version for the gaming machine there is a mode of simultaneous playing for two players. The version for NES has only single player mode. In the version for NES, the player can also go to the house, where after winning over several opponents he gets additional weapons.
‹
›
Home
View web version