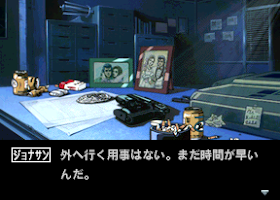 Switch "NVRAM Storage" to Shared and restart emulator. Before swap CD, save state to file, next CD, upload save state file, restart emulator.
Genre: Adventure
Perspective: 1st-person
Art: Anime / Manga
Gameplay: Shooter
Setting: Sci-Fi / Futuristic
Published by: Konami
Developed by: Konami
Released: 1995
Platforms: 3DO Interactive Multiplayer, PlayStation (PSX, PS1)
Policenauts is an amazing game for 3DO combining interactive video and graphic adventure. Initially, this game was released in 1994 for NEC PC-9821, and was later finalized and released first for 3DO Interactive Multiplayer in 1995, and then in 1996 for PlayStation and Sega Saturn. The game is not an official one, but a continuation of the no less popular and interesting game Snatcher. The game is one of the earliest masterpieces of Hideo Kojima, it was he who created the series of games Metal Gear. The plot in the game, as in all the games of Hideo Kojima is very complicated and at least deserves a separate book or film.
In 2010, people built their first colony in space under the name "Beyond Coast". After 3 years in 2013 comes the understanding that the colony needs to be protected and protected, so the best five police officers are recruited from the Earth. Gatse Becker of Scotland Yard, Japanese Sadaoki Tokugawa, Salvatore Toscanini from New York and two police heroes of the game Jonathan Ingram, and his best friend Ed Brown from Los Angeles. Forming from them a group of Policenauts, also known as Original Cops.
Once during the test of the new spacesuit, Jonathan has something to do with the suit, and he carries him to the depths of the cosmos. After that, he is considered dead and missing. After 25 years, he is found, thanks to the modulus of cold sleep that plunged him into a state of suspended animation, Jonathan did not drop, did not change and remained alive, although he is already 55 years old.
Trying to forget his past, Ingram Jonathan opens a detective agency on Earth. Once he was visited by his ex-wife Lorraine, who had already managed in those 25 years to find her new husband Kenzo Hojo. She asks Jonathan for help in finding her new husband an employee of a large pharmaceutical company located in the colony of Beyond Coast, since he mysteriously disappeared. The only clues he left are pills, half a leaf of the tree and the word "Plato". At first, Jonathan refuses. But after she left she was killed by a man in black, whom Jonathan never managed to catch. Now, Jonathan is determined to fulfill resolutely the last request of his ex-wife. For this, he again visits Beyond Coast, where he meets his old friend Ed Brown from LAPD, who agrees to help him.
‹
›
Home
View web version