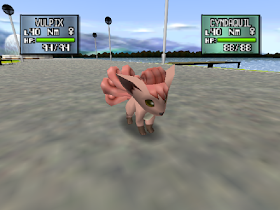 Genre: Strategy / Tactics
Perspective: 3rd-person
Pacing: Turn-based
Published by: Nintendo of America
Developed by: Nintendo
Released: 2001
Platform: Nintendo 64 (N64)
The game includes all 251 Pokémon from the first and second generation games of the Pokémon series. The game is a continuation of Pokémon Stadium, and although in North America and Europe the game came out under the name Pokémon Stadium 2, in Japan it was already the third game of the Pokémon Stadium series. The Japanese edition of the game was compatible with the system Pokémon Mobile System, released simultaneously with the game.
In the game you can move Pokémon from Pokémon Red, Blue and Yellow games to Game Boy and Gold, Silver and Crystal on Game Boy Color. As in the previous Stadium, the Pokémon Pikachu here is a secret character that can only be accessed if the player has a game cartridge for the portable console. Most of the game takes place in the city of White City, where various sports institutions, military organizations, research centers and playgrounds are located. Also in Pokémon Stadium 2 there are many mini-games and the opportunity to play together.

The goal of the game is to win all Cups at the stadium and go through the entire Gym Leader Castle. When all the cups are won and the Castle of the leaders of the stadiums is passed, a rival of the protagonist will appear, with whom it will be possible to fight. If the player wins, the second round is opened, and to complete the game, you need to take all the cups again, pass the Castle and defeat the opponent. But in this case, the player will have other Pokémon, and the complexity of the game will increase.
There are four different cups for which the player can compete. Eight trainers take part in the drawing of each cup. In all fights, the player uses six Pokémon, which can be selected in Stadium 2 or downloaded from the cartridge for the Game Boy console. The exception is the fight for the Challenge Cup, in which you can only participate with three Pokemon. There is a so-called "Little Cup", in which only unevolved Pokémon with a level no higher than 5 can participate. Another cup is the Poke Cup, in which high-level Pokémon participate, and the player has to fight with four waves of eight coaches. Finally, in the Prime Cup the player can use absolutely any Pokémon, but the opponents will only have Pokémon of the maximum, 100 level. The Challenger Cup is the final one, there will be four waves of coaches with Pokemon 30, 45, 60 and 75 levels. In this cup, the composition of the teams of the player and his opponents is determined randomly.
In addition to the cups, you can take part in battles in the Castle of the leaders of the stadiums. The castle of the leaders of the stadiums is completely analogous to what was in the Pokémon Stadium. The difference lies in the fact that the leaders of the Joto region are represented here, not just the Kanto, the opportunity is added to fight with the Elite Four's trainers, Silver is the player's opponent, and Red, the protagonist of Red and Green, is the final boss. Usually, each leader uses only Pokémon of the same type, but in the Castle each of them has a different type of Pokémon, able to cover the weaknesses of the team.

The combat system in Pokémon Stadium is completely the same as in the portable releases of the series. In connection with the release of Gold, Silver and Crystal, the combat system, taken from Red, Blue and Yellow, was changed to be closer to newer games. The player uses his Pokémon to fight the Pokémon of other coaches. The battles take place in a step-by-step mode. During the battle, the player can order his Pokemon to use this or that ability in combat, change the fighting Pokemon to another, or surrender and refuse to participate in the tournament. Having lost all of his Pokémon, the player loses. Each Pokemon has life points, if they run out, then the Pokémon can no longer fight. In addition, Pokémon belong to different types, to categories by spontaneous affiliation. The type determines which type of attack the Pokemon will be resistant to, or, conversely, vulnerable. Some Pokémon can be of two types at the same time, while a number of their features remain. The principal difference from the combat system in the portable releases of the series is that during the battles you can not use objects and after the victory the Pokémon do not get experience. However, you can equip the Pokémon with an item that the Pokémon can use at the critical moment of the battle.
‹
›
Home
View web version