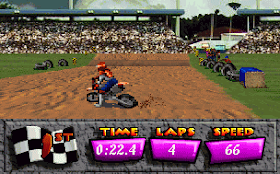 Genre: Racing / Driving, Sports
Perspective: 3rd-person
Vehicular: Motorcycle
Published by: SEGA of America
Developed by: Artech Digital Entertainment
Released: 1994
Platform: SEGA 32X
The representative of motorcycle races on the game console Sega 32X executed in 3D. This time you have to travel around in circles, on a variety of routes. The course slope is variable and you can jump on different bumps or lose control by driving into the mud. On your choice there are a lot of tracks and different bikes. In the game you will also find some elements from the game Road Rash. You can beat rivals, and they you - a hand or foot. The main goal - to come to the finish line first, that would occupy higher positions. The game has several game modes, championship and free race.
Unlock Track 12 with Super Bike:
Enter these codes into the "code entry" screen - CbT3OfKB8tR.
‹
›
Home
View web version