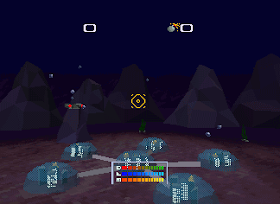 Genre: Action
Perspective: 1st-person
Gameplay: Arcade, Shooter
Setting: Sci-Fi / Futuristic
Published by: Atari Corporation
Developed by: Virtuality Entertainment Ltd.
Released: 1995
Platform: Atari Jaguar
Missile Command 3D for Ataeri Jaguar is the transfer of the legendary classic arcade into a new 3D space. What can not but rejoice the lovers of the old school, because the game has not lost anything, but only just acquired. The game is made in textured polygonal 3D. In fact, there are three games on the cartridge. Classic version of the game Classic Missile Command, we can say that this is a new game, made in a classic 2D style with improved graphics, music and sound effects. Missile Command 3D it is also called Missile Command Plus - this is the new mode of the game transfer of the classic arcade into a new 3D space. Virtual Missile Command mode, originally planned for the virtual reality helmet JagVR (Atari Jaguar VR), which would immerse the player in a completely new virtual space.
The game is made really very good graphics pleases the eye, there are small effects that make the game more realistic, for example, air bubbles under the water, glare, etc.
Your task remains the same as before to shoot down enemy missiles and space ships and prevent them from destroying the city you are defending. It is now more difficult to do this, since you are in a 3D space and you need to use a radar to track missiles. With each successive level the game will become more difficult.
‹
›
Home
View web version