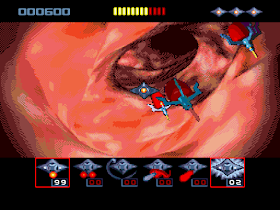 Genre: Action
Perspective: 1st-person
Art: Video backdrop
Gameplay: Arcade, Rail Shooter
Setting: Sci-Fi / Futuristic
Published by: Psygnosis Limited
Developed by: Psygnosis Limited
Released: 1993
Platforms: SEGA CD / Mega-CD, 3DO Interactive Multiplayer
The game takes place in 2051 AD. Two megacorporations are fighting for supremacy in a crowded and overly polluted unknown planet. The dominant corporation (CyberTech Industries) accuses the other (Axioma) of killing the president. Now the second corporation's turn, what will it do? And she secretly injects a virus into the blood of the president CyberTech. But we learn about it in time and with the help of the latest technologies we are sent to the body of the president! You need to destroy everything you can and defeat the virus that has already occupied the brain.
Microcosm is a 3D fly-shooter, more like Descent. The player will fly inside the human body, firing off viruses and enemy ships, collecting improvements and more powerful ships. In the end, you need to get to the brain and stop Gray M, a creature controlling the body of Korsby.
Microcosm uses pre-rendered FMV clips created on the basis of high-resolution fractal graphics (the very arteries and veins), digitized music and sound effects.
At one time, on the Amiga CD32 game was a hit. In principle, the Sega CD game can also be considered interesting and unusual, although the quality does not compare with other versions.
Also left the game in Germany and the UK. In Japan, the game was released on 25.02.1994.
Microcosm was released for 3DO, Amiga CD32, DOS, FM Towns, Sega CD. A demo version was made on the Amiga CDTV (however, the final version was never released), and there was also a plan for the release of the game for Philips CD-i (it ended only with a prototype).