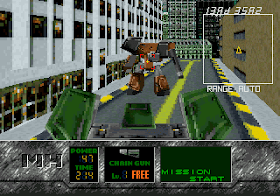 Genre: Action, Simulation
Perspective: 1st-person, Behind view
Gameplay: Shooter
Setting: Sci-Fi / Futuristic
Vehicular: Mecha / Giant Robot
Published by: SEGA of America
Developed by: SEGA Enterprises Ltd.
Released: 1994
Platform: SEGA 32X
Five years after the founding of the World Federation, small wars still continue. To preserve peace, the Armed World Federation equips some of the police with special robots called Mechs, also known as Metal Heads, robots like robots from the game Front Mission. Armed chaotic revolution led by terrorists. Armed with their own Furs. Terrorists take control of the whole country. The player, together with his team, goes to liberate the capital. You start in a small border town, to advance to your goal. The player must perform a certain mission, which is given at the very beginning of the level. This can be a task to clear the level. What is noteworthy, the mission is declared to us in a voice. The game is completely done in 3D. What gives the game a special piquancy. You can include several camera modes, several views from the cockpit and a top view similar to the one in the GTA game.
‹
›
Home
View web version