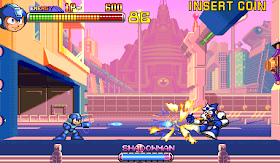 Genre: Action
Perspective: 3rd-person
Gameplay: Arcade, Fighting, Shooter
Published by: Capcom Co.
Developed by: Capcom Co.
Released: 1996
Platform: Arcade Machine
In this game, you continue the battle against the wicked Dr. Wili, now to you, in addition to past heroes: Mega Man, Protoman, Bass, joined another 1, his name is Duo, he's a cyborg using his fist instead of a blaster like the previous ones. Before the game starts, you are given a choice of 3 scenarios: find Wili, save the Roll and return the stolen technology, each with its own set of enemies. The 2-D graphics look just great. The battles are also going on in a fighting style and have not become worse. Bosses became much more, thanks to which at the same time there was an increase in the abilities of the characters, to be precise, you borrow a special attack of the defeated enemy, from the set of which is a strategy to fight the next boss. In the end, you are waiting for the most vicious doctor, who will need all the techniques that were given with such difficulty without exception.
‹
›
Home
View web version