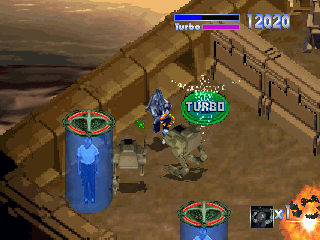 Genre: Action
Visual: Isometric
Gameplay: Shooter
Setting: Sci-Fi / Futuristic
Published by: American Laser Games
Developed by: American Laser Games
Released: 1995
Platform: 3DO Interactive Multiplayer
Semag-Resal, the evil race of aliens from the Nacirema system overcame and enslaved the Earth. To gain a foothold, strangers have built numerous military bases, manned with unmanned aerial vehicles. However, it becomes known that secretly conducted experiments on the cultivation of cyborgs on these bases. If the experiments succeed, and there is no longer any doubt, cyborgs that can not be distinguished from ordinary people will be able to penetrate and destroy the remaining centers of resistance from within. Only a group of volunteers is the last hope of the Earth. Suicides penetrate into the bases, stuffed with deadly electronics, rescue captives and destroy any electronic activity. Bio-amplifiers are very suitable for these missions, providing an energy shield and increasing the human ability to extreme.
The choice is given to four unique fighters: HAWK, AZOTAR, FREON and ARASHI.
And now a fly in the ointment. American Laser Games, proved to be a developer of virtual shooting galleries, for some reason climbed into the world of isometric shooters. No, all these 3D animation, despite their stupidity, can still be forgiven - even if they do not fit well together, but for 1995 it was still there and there. But the gameplay itself, despite the rich 3D effects, is too difficult, and in general the game somehow does not pull, though, and the thrash can not be called ...
3DO Magazine gave the game 1 star from 5. Flux magazine took it to category D

These codes can be entered by both players when playing together, but they can not be used at prize levels.
B, C, A, C, A, C - rapid fire;
B, A, C, C, B, A - scattered fire:
C, A, B, A, B - super-protection;
A, C, C, A, B, B - power amplification.
Power enhancement caches must be entered during the demonstration of the level cut scene, before the game starts.
To use the secret menu, press and hold L + C while the video screen at the beginning of the game is shown. Here you can set the difficulty level.
‹
›
Home
View web version