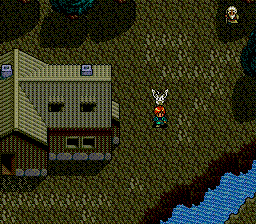 Genre: Role-Playing (RPG)
Perspective: 3rd-person, Top-down
Art: Anime / Manga
Pasing: Turn-based
Published by: Working Designs
Developed by: Game Arts Co., Studio Alex.
Released: 1993
Platform: SEGA CD / Mega-CD
The first part of the famous role-playing game Lunar.
The hero is a young man named Alex. He dreams of becoming the same as the great warrior of the past Dragon Master Dyne. But to become a Master of Dragons, you need to find four big Dragons, from which Alex should ask for permission. The girl Luna accompanies him on a journey and, I will tell by secret, Alex is madly in love with her. But soon, young people will learn that someone is trying to change the world and revive the ancient goddess Althena. And your girlfriend plays a great role in this!
The game is a traditional RPG with a great storyline, great animation clips. Battles are chaotic, enemies can be both physically attacked and magically attacked.
The American version came out with a delay - only in December 1993 (after 1.5 years, however sad). But with the original date of the appearance of the game in Japan is not all smooth - on the Internet they write everywhere in June 1992, but here is a different day - and 16, and 22, and 26; just the last date seems right (according to Japanese sources).
Interestingly, Lunar - The Silver Star three times changed and altered. Later, she came out a little changed (a remake) on the Playstation and Sega Saturn. In our time, there was another remake - Lunar Legend in 2002 on the Nintendo DS. And finally, in 2009, the PSP released the last remake - Lunar: Silver Star Harmony.
‹
›
Home
View web version