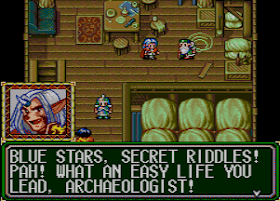 Genre: Role-Playing (RPG)
Perspective: Top-down
Visual: 2D scrolling
Gameplay: Platform
Art: Anime / Manga
Published by: Working Designs
Developed by: Game Arts Co., Studio Alex
Released: 1995
Platform: SEGA CD / Mega-CD
Events take place hundreds of years after the first part. You control Hiro, a young treasure hunter who enjoys exploring various caves and ruins. His partner is a flying cat Ruby (who really claims that he is a little dragon). One day Hiro meets a mysterious blue-haired girl named Lucia. She tells that she flew from the neighboring Blue Star and needs help and protection from the evil Zophar. Bewitched by the beauty of a stranger, Hiro agrees to help.
The game is a traditional RPG with a great storyline, great animation clips. Battles are chaotic, enemies can be both physically attacked and magically attacked.
Compared with the first part, here improved graphics (more detailed), elongated rollers (in the amount of up to 50 minutes), improved voice acting. The creation of the game was spent three years and about 2.5 million dollars.
The American version was published on June 30, 1995 (or in September?).
The game is amazing. In 1995, it became the best-selling for Sega CD. The second most sold game Sega CD in Japan and the third most sold on the world (for Sega CD).
Later the game came out slightly modified (a remake) on the Playstation and Sega Saturn.
‹
›
Home
View web version