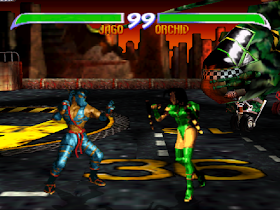 Genre: Action
Perspective: Side view
Visual: 2D scrolling
Gameplay: Fighting
Setting: Fantasy
Published by: Nintendo of America
Developed by: Rare
Released: 1996
Platform: Nintendo 64 (N64)
Another representative of the series of fighting games, Killer Instinct was known for its heaped combo system. Ironically, this game was able to stand out among the host of endless Mortal Kombat clones with this fashionable chip, as well as a cunning system of punches: each fighter had the opportunity to inflict a weak, normal or strong blow with his hand or foot. These are the features of the gameplay and the unusual pre-rendered graphics have put this creation on a kind of pedestal of honor.
However, let's not forget that the games from Rare (and it was they who fired this meat game) were famous for their elaboration on all fronts, remember at least a wonderful arcade Donkey Kong Country. Therefore, do not be surprised that the musical part here is simply gorgeous! Especially I can not help but note the main theme - it is so delicious, as far as it's possible to imagine music, which awakens in the body incomprehensible stirring of substances called soul.
What can not but rejoice is the complete musical radicality of the tracks - there really is not a single one like it, the style varies from something pop-like with female vocals, to harsh orchestration and interesting ambient themes. I will not say anything about the extreme-electronic theme for a character named Glacius - the thing zarulivaet all and all of its creativity.
‹
›
Home
View web version