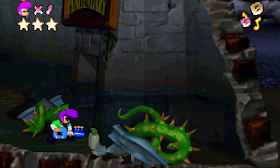 Genre: Action
Perspective: Side view
Visual: 2D scrolling
Gameplay: Platform, Shooter
Published by: U.S. Gold Ltd.
Developed by: Arc Developments
Released: 1996
Platform: 3DO Interactive Multiplayer
In a nutshell, our musical hero Johnny Bazookatone, mowing under Elvis, in 2050 temporarily replenishes the ranks of the prisoners of the Sin Sin prison thanks to El Diablo, the lord of darkness. His guitar with the female name "Anita" is now with the villain, so Johnny must go through a hard way and get his main treasure back. In the game, a flamboyant intro video (yes, it's a video!), Crazy animation, pseudo-3D view, all rocker effects - without exaggeration the game can be compared with Donkey Kong Country, thus calling an incomparable hit. But the complex management and some minor shortcomings have formed, albeit small, but still a category of those who consider the game a complete sludge. Those who are not indifferent to Johnny Bazookatone do not. Some releases of the game were in two disc versions, the additional medium was a music CD, with melodies, based on the game. The duration of the game is low - less than 60 minutes, but if you gently smooth out the levels and find all the secret areas, like all the active gamers do, the passage will become full.
3DO: The complexity of the game is close to critical. I had to uncover the joystick, because playing the emulator on the keyboard is simply unrealistic - you need to keep a few buttons pressed regularly, my fingers are not so clumsy. Dead, the hurling skulls are so tenacious that I do not advise you to walk on the ground. Despite all the positive aspects of the game, it is better to pay attention to later versions.
DOS: the complexity is noticeably lower, but otherwise the game is faking, and in all positions - 256 colors, 1-2 thousand spoil the image, a clip in a small window, etc., etc. In the appendage, the game is badly emulated in DOSBOX. Without a sound (we switch off in the menu of the game itself) it still goes, but with any audio accompaniment completely freezes.
PlayStation, Saturn - the complexity of the game is reduced in comparison with the 3DO version, probably there are some other minor improvements for the better. It is rumored that visually and by hearing the din became even steeper. According to other rumors, the version for Sega is steeper. It will be necessary to check.

Collect simple notes. A thousand such notes will give you life. Color notes will allow you to get to the prize stage.
Shooting down, Johnny can jump or, if he fell, go up.

Amanita at the gate of the prison will allow Johnny to get to the prize stage.
To avoid zombie attacks, jump, shoot down.
If the horn is broken, then the guard dogs will not wake up.
Yellow amanita gives a small blow, and purple is a big one. Amanita with dots is very harmful.
To get on the bonus with extra life, jump into the light.
The mattresses are your chance to jump higher. Use the keys to open the doors.
Paul will fail. Through a large hole you will reach the underground Styx River, which flows under the prison. To pay for the boat, shoot the fish.
At the disguised level of "Sushi" go to the right, look for notes. Jump to the platform to the right of the notes and down, you will find yourself in front of Sushi. Having received additional life and jumping into the boat, consider that she does not stand still.

A bell from the front desk can bring you life.
To get to the second floor, jump on the suitcase. On the third floor, use the teleporter. Shoot the suitcases, they are on the left.
In the tower with a clock, look for the passage to the attic, there take the soap. They need to shoot a dirty old man, after which you can start the generator by firing on the box to the right.
Using the lift, collect simple notes.
At the "Disco" boss stage, shoot the ball under the ceiling so that Johnny can jump higher.

In the restaurant, prepare meals by shooting at the pigs and chickens, and feed them to the fat man, whom then hit the stomach.
During your unusual trip, shoot the switches to go on.
On the hellish kitchen, turn around and shoot the button. Stand to the right of the mousetrap and shoot the bait to jump. Then wait, standing on the saucepan, when the escaping steam will throw you even higher. Get to the top shelves and jump on the knives when they are vertical. Shoot the eggs and bags of flour, so that they fall into the cauldron. Shoot the heated burger. Jumping into the canister, you teleport upward. Look for flour and eggs there. When there is enough flour and eggs and the dough will pop out of the kettle, jump into it and shoot the boss in the head.

Go to the right. In the morgue, you have to jump on boxes, climbing up and avoiding corpses. At the top go through; to the right and take the headphones. Continue to move to the right to get to the prize stage.
Then go to the laboratory. If you shoot on the headphones of Dr. Lumphammer, he will not hear Johnny. With the help of a lift, climb to the floor above and, having coped with the virus, go up another floor - there is a second virus. The third and last virus is in a secret room. Jump gently to avoid falling into a pit with spines. Jumping over them, use the float gun, while pressing Down. Having neutralized the virus, go to the surgeon's office on the last lift.
When the doctor rushes at you with a bor-machine, run away from him and shoot diagonally. The same tactic is good against a syringe. And during the attack with rotating blades, stand in the center of the screen and wait for the blades to approach, then jump up and start shooting.

After the battle with the four devils (Kung Fu, Roman, Sci-Fi and Western) you will find yourself face to face with El Diablo. Avoid lightning, shoot diagonally. The bottom corners of the screen are safe: Both left and right.