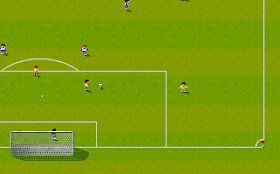 Genre: Action, Sports
Perspective: Top-down
Sport: Football (European) / Soccer
Published by: Telegames
Developed by: Sensible Software
Released: 1995
Platform: Atari Jaguar
A quick glance at the sports simulator of Soccer International Sensible Soccer for Atari Jaguar, it can not be found out anything special. But for some reason this series, affectionately called Sensi, has sunk many players into the soul. In the game there are many national teams, including the national team of Russia and Ukraine. The appearance in the game on the field from a bird's-eye view, the football field looks a bit out of proportion.
‹
›
Home
View web version