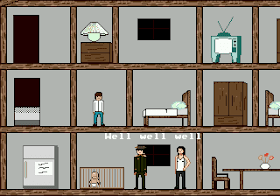 Genre: Educational
Perspective: Side view
Visual: 2D scrolling
Educational: Math / Logic
Developed by: Nick Weihs
Released: 2014
Platform: SEGA CD / Mega-CD
The game Hide the Baby is the port of the game of the same name, authored by Nick Weihs, he made it with the help of Unity.
According to the story, you play for a mother alone in China, which should hide her second child from the inspection. Unfortunately, the plot does not say where the single mother took another child. You should look for different items scattered around the house and then use them to disguise the child. So that when the inspector came he did not realize that the baby was in front of him.
‹
›
Home
View web version