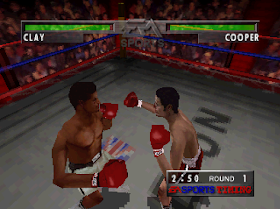 Genre: Sports
Perspective: 1st-person, 3rd-person, Top-down
Sport: Boxing
Published by: Electronic Arts
Developed by: Gray Matter Inc.
Released: 1995
Platform: 3DO Interactive Multiplayer
"Foes of Ali" is a sports boxing game that allows you to check the credibility of the fists Sonny Liston, Joe Frazier and Kenny Norton, Chuvalo and Cooper. You can choose one of three rules:
"Exhibition", "Tournament" or "Carrier", watching the fight through the lenses of twenty-one cameras. But most importantly, you yourself will become a participant in the bloody and uncompromising "massacre by the rules."

"Exibition" is a friendly meeting;
"Historic" - fight with one of Ali's real opponents;
"Historical Info" - information about real combat;
"Boxes Stats" - information about boxers;
"Custom" - a battle between any two boxers (optional);
"Tournament" is a tournament of four or eight boxers. You will see the results of the draw. To conduct a second draw, click on "Reshuffle". To start the tournament again, click "New";
"Career" - viewing the history of the fighting career of the great Mohammed Ali.

Conservative, almost does not move around the ring. His left hook, Henry's beater, is dangerous. Cooper can easily be knocked out.

He prefers to work on the body. Favorite combination: a straight hit - a hook - a hook. Very aggressive, but slow and not hardy.

He follows you with short steps. The speed is average, but the blow is powerful, especially straight. She keeps her distance perfectly. Wait, when he is exhausted, and then hurl at him a series of blows to the head, leading to a knockout.

Excellent moves, weak in defense, but dangerous in attack. Strong left, well put left hook. Practically not a knockout, win it on points.

Leaves from blows, tirelessly circling near the enemy. Favorite combination: straight - straight - cross Use powerful straight strokes against him.

Very quickly moves around the ring, strikes immediately after the stop. Try to get ahead of him with a stroke. The impact strength of Foster is average, the speed of impact is also average. Tends to combinations with the use of a strong straight blow.

Delayed, but well organized defense. He prefers a melee, and uses the most powerful uppercut in the clinch. Use blocks: Norton's slopes and dives lead to a series of good shots at close range.

Uses painful pinpoint strokes, preferring to drive you into a corner. Impose him a fight, since Vepner's blows are rather weak.

Aggressive, especially after knockout. The speed is average, but the blow is heavy. Excellent command of the left. Crown combination: double - straight. Defend and wait until it reveals itself. After a strong blow, Spinke immediately stops.

To see the developers, use the name "TEAM"
And in order to see a photo of the champion in 1969. light heavyweight (Ivan Prebeg), enter his last name - "PREBEG".
The names "ZIPPI" and "CROWD" will revitalize the game - try it!
A computer opponent will be stupid if you use the name "AIAAT" or "AIVT".
The name "PADC" activates three special abilities. Button A for six seconds will knock the boxer B into a knockdown. With the help of pressing In the same boxer A the right eye; if this is done three times, the referee will stop the game. Button C will immediately move you to the tenth round.
‹
›
Home
View web version