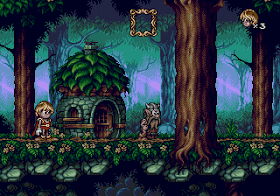 Genre: Action
Perspective: Side view
Gameplay: Platform, Puzzle-solving
Setting: Fantasy
Published by: Vic Tokai
Developed by: Psygnosis Limited
Released: 1994
Platforms: SEGA CD / Mega-CD, SEGA Genesis / Mega Drive
The Flink game is a very colorful and colorful platformer, one of the best in its genre for the Sega Mega-CD. We need to pay tribute to the developers of the game from Psygnosis, they made a really beautiful and interesting game about the adventures of a young wizard, whose city was invaded and now he is to release four elders from Demon Guardian, servants of the sinister Wicked Wainwright. Unlike the version of the game The Misadventures of Flink for Sega Mega Drive / Genesis, the game for Sega CD is not cut and has better graphics, all levels, including additional ones, as well as beautiful animation clips. Flink in the course of the game can conjure and use various spells, which he learns from scrolls with spells, but for this he needs to collect the necessary ingredients.
The world in the game is similar to the world from the game The Adventures of Lomax for PlayStation.
In the US, this game is called The Misadventures of Flink.
Also in the style of graphics game is similar to Lionheart.

Enter this cheat in game play - Press down and start and the same time then let go of down and while still holding start press right x3, left x3, right x2, left x2, right, left.
After you let go of start, a cheat option will appear at the bottom of the main menu.
‹
›
Home
View web version