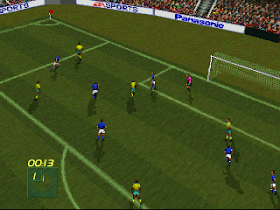 Genre: Sports
Perspective: Bird's-eye view
Visual: 2D scrolling
Interface: Direct control, Multiple units / characters control
Sport: Football (European) / Soccer
Published by: Electronic Arts
Developed by: Extended Play Productions
Released: 1994
Platforms: 3DO Interactive Multiplayer, SEGA CD / Mega-CD, SEGA Genesis / Mega Drive
The most popular sports game. Football (Soccer) is shown as if from within. You will see those sharp moments of the game, which can not be distinguished from the stands or in the television reproduction. At your disposal a lot of "side chambers", slow-motion display, noise design. The possibilities of the game are enormous, hence, your improvement is boundless.

The game is launched from the main game menu "GAME SETUP", consisting of the following items:
"EXHIBITION" - holding a friendly match. Select the two participating teams. The characteristics of the teams are shown on the screen in the form of strips, the length of which reflects the assessment of the qualities of the team in this or that nomination: "SHOOTING" - shots on the goal, "RUNNING" - speed of movement of players, "PASSING" - accuracy of the transmissions, "DEFENSE" - actions in protection, "TACKING" - the quality of the selection of the step, "GOALIES" - the skill of the goalkeeper,
"OVERALL" - the general indicator. When choosing a particular team.
"TOURNAMENT" - holding the tournament (according to the World Championship scheme). Choose one - eight team-participants. The characteristics of the commands are displayed on the screen - see "EXIBITIONS".
"CHAMPIONSHIP" - holding the championship.
"LEAGUE" - is selected from one to eight teams to participate in the league championship, must play with all on a circular system. The winner is determined by the greater number of points accumulated. Do not forget that to play "in one go" tournament or league is beyond the power even of notorious fans. Therefore, after completing the next match, do not forget to write down the current position (see "OPTIONS").
"OPTIONS" - options. Here you can choose:
MODE - game options: ACTION - both teams make little mistakes and play equally fast, SIM - imitation of real life, players gradually get tired, move slowly, are inaccurate in the programs.
LENGHT - a football match consists of two halves. You can set the duration of the halftime: 2, 5, 10, 20 or 45 minutes.
CLOCK - is the time counting during the stops? STOP - yes, it stops. RUNNING - no, it runs.
WEATHER - weather choice: NOT - hot, DRY - dry, DAMP - wet. SOAKED is a downpour. RANDOM - the weather is random (as in life).
SOUND - soundtrack: ALL-complete, MUSIC - only music, SFX - only noise effects. NONE - with cotton in the ears.
DOLBY - connection of the DOLBY system.
OFFSIDES - Your attitude to the offside position. Put a tick - and the judge will be able to terrorize you with whistles, constantly tearing off brilliant attacks to both you and your opponent. Put a cross - and "out of the game" is forbidden FOULS - if you are not strong in the rules and the judge who passes cards left and right annoys you, take it out by putting "NO CARDS".
"RESTORE GAMES" - load previously saved game.

Beginning of the game from the center of the R or L - beating player do not forget to deploy to the side of the next partner.

Assault (with the ball):

Protection (without the ball):

A - select the ball or block with a subcategory;
В - select ball or block;
C (+ L or R) - acceleration of running of the football player;
C + L + R - push the opponent;

Control of the goalkeeper:

Corner kick, strike out - in attack:

Angular blow, out - in defense:

Fighting for the ball in the air: