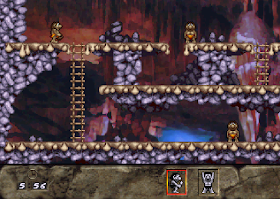 Genre: Action, Puzzle
Perspective: Side view
Visual: 2D scrolling
Gameplay: Platform
Setting: Prehistoric
Published by: Atari Corporation
Developed by: Imagitec Design Inc.
Released: 1994
Platforms: Atari Jaguar, Super Nintendo (SNES)
Evolution: Dino Dudes is a very interesting and colorful game, about the uneasy life of cavemen. The game remotely resembles the game Lemmings. In the game we have to solve a lot of puzzles and think carefully logically. With each level, the game will become more complicated, but you will also have more tools to solve the task you have set. In each level you have to perform certain tasks, either bring someone from the tribe to a certain point on the map, or kill all the dinosaurs, etc. Initially, the people we manage to manage will be primitive enough, and only be able to build a ladder from each other. Gradually cave people will become smarter and will discover fire, a wheel, a spear, etc. Also, some of them can become priestesses (mages / shamans) towards the end of the game. The game is very colorful and rich in funny humor. A large number of different levels will not let you get bored.
For Atari Lynx the game was released under the name Dinolympics.
For Sega Genesis and most other game consoles called The Humans.
‹
›
Home
View web version