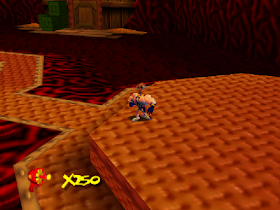 Genre: Action
Perspective: Behind view
Interface: Direct Control
Setting: Fantasy
Narrative: Comedy
Published by: Rockstar Games
Developed by: VIS Entertainment Limited
Released: 1999
Platform: Nintendo 64 (N64)
The game is the first and only part of the series, performed in 3D graphics. According to the plot on the head of the worm Jim fell a cow, because of what he went to the hospital, where he lies in a coma. In order to get out of it, the worm must find in its subconscious marble balls and golden udders, and also overcome the villains that have moved into their brains. The player can access Jim's brain sections such as memory, happiness, fear and fantasy, in which it is necessary to destroy enemies with different weapons and collect items: marble balls allow Jim to return his mental faculties and open new levels, and golden udders to access various sections the brain.
The development of Earthworm Jim 3D lasted three years. During this time, the creators team faced a lot of difficulties, because of which the release was repeatedly postponed, and many levels and characters were removed from the game itself, the version for the PlayStation console was canceled. The output of Earthworm Jim 3D was ambiguously met by the game press. Some observers reacted positively to level design and soundtrack, but a number of reviewers were disappointed in Earthworm Jim 3D due to technical flaws and inconvenient camera systems.

Earthworm Jim 3D is a game in the platformer genre, executed in 3D graphics. Game mechanics is similar to other representatives of the genre on the Nintendo 64, such as Super Mario 64, Banjo-Kazooie and Donkey Kong 64.
New locations in Jim's mind are opened by collecting golden udders, and new levels in each location are opened by collecting marble balls that enhance Jim's reasonableness. The sacred cow of contemplation tells about the main tasks. As in previous games Earthworm Jim, despite the numerous elements of the platformer, Jim's main combat method is shooting from his blaster. In Arcade machines, you can also get other weapons. With the help of some of them, you can aim with the camera from the first person, which allows you to shoot at hard-to-reach enemies and objects. The stock of each weapon is limited. In some cases, it is necessary to perform certain tasks, for example, to pass a certain area for a limited time or to fight the boss.
Jim has health glasses. If the character is exposed to an enemy attack, stumbles onto a dangerous object or falls from a high altitude, then the health points will decrease. Replenish them can be the collection of marble balls, as well as molecules that fly out of the destroyed enemies. In addition to weapons, Jim has such features as a turntable (Jim twists his head like a propeller, allowing to fly for a short time), high jump (allows Jim to jump on high objects), attack with a whip (Jim uses himself as a whip) and squat (allows Jim Dodge weapons of enemies, as well as roll on the ground).

When Jim played the accordion, a cow suddenly fell on his head, causing him to go to the hospital where he was in a coma. Jim wakes up in her mind and discovers that he has gone mad. Villains from his past settled in his mind, and if something does not happen in the near future, Jim will remain in a coma forever. His super-ego fights in the mind to stop the madness. In order to restore his mental health, he must find all the golden udders, and to raise the mind - marble balls. When Jim enters his mind, he learns that the four locations of the mind were taken under control by his villainous rivals, as reported by the sacred cow of contemplation. Jim should collect the golden udders to open other locations, and marble balls to unlock levels in the locations. In the end, Jim wins the four villains, who took over the possession of the locations of his mind, and finally comes out of the coma.
‹
›
Home
View web version