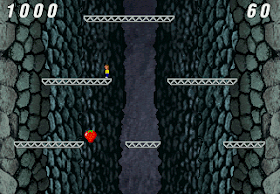 Genre: Action
Perspective: Side view
Gameplay: Arcade, Platform
Published by: Reboot
Developed by: Reboot
Released: 2011
Platform: Atari Jaguar
Homebrew game Downfall for Atari Jaguar from Reboot made in 2011. Slightly similar to the Spike Goes Down game for Vectrex. The game is made in the traditional style for Atari. In the game we have to play for the person who needs to get to the bottom of the cliff, so that descending on the beams can not fall and not break, but at the same time, and make sure that the screen approaching from above does not flatten it. In the meantime, you will need to collect various bonuses - fruit. Some of them give just glasses, and some can be activated and gain an advantage.
‹
›
Home
View web version