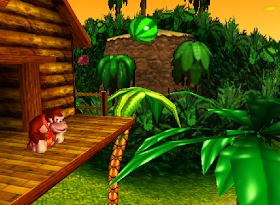 Genre: Action
Perspective: Behind view
Gameplay: Platform, Puzzle elements
Setting: Fantasy
Published by: Nintendo of America
Developed by: Rareware
Released: 1999
Platform: Nintendo 64 (N64)
It is the continuation of the Donkey Kong Country trilogy on SNES. Donkey Kong 64 tells the adventures of Donkey Kong and his four monkey relatives, about how they are trying to recover their reserves of Golden Bananas and expel the evil king K. Ruhl and his associates from the vicinity of their island. The player can control all five Congs in 8 separate levels. The game contains a large game world, as well as a multiplayer mode and several mini-games.
Donkey Kong 64 was the first game requiring Expansion Pak, which provides more RAM for improved graphics and area expansion (in the following games, Expansion Pak was not required, except for The Legend of Zelda: Majora's Mask).

The game is a 3D adventure game with a strong bias toward the platformer, similar to Super Mario 64 and Banjo-Kazooie. There are a total of 5 playable Kongs, each of which has unique (and increased) abilities. The player starts with access only to Donkey Kong. Unlocking the remaining 4 Kongs is part of the game (the order is the following: Diddy, Lanka, Tini, and then Chunky). There are a total of 7 territories (excluding DK islands): Jungle Japes, Angry Aztec, Frantic Factory, Gloomy Galleon, Fungi Forest, Creepy Castle. Each new Kong that the player has released can be accessed through the tag barrels, which are scattered around the world. In addition, each new Kong represents a color that works together with a unique collection system in the game where objects such as bananas and coins can be collected by that Kong, which is the same color as the object. Colors are distributed as follows: yellow for Donkey Kong, red for Diddy, purple for Tini, blue for Lanka and green for Chanki.
Each playable Kong has several types of things to collect. First of all, this is the Golden Banana. There are five Golden Bananas for Kongs on each level, so only a specific character can get them.