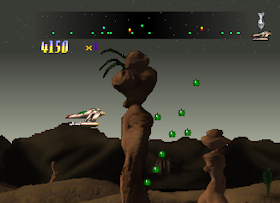 Genre: Action
Perspective: Side view
Gameplay: Arcade, Shooter
Published by: Atari Corporation
Developed by: Atari Corporation
Released: 1996
Platform: Atari Jaguar
Game Defender 2000 is a remake of the classic Defender game for the Atari Jaguar game console. This game can be called a collection of 3 in 1. The game immediately has three games: the classic Defender and Defender Plus and the remake of Defender 2000. The main task in the game will be the destruction of enemy space ships that come to the planet from outer space and try to kidnap humanoids. You also need to save humanoids. In the version of Defender 2000, in comparison with the classic versions, vertical scrolling, the ability to improve weapons, various bonus levels, of course, improved graphics and a very dynamic gameplay are added.
Level skip: Have your name be BEEST. During gameplay in 2000 mode , hit 3 to go to the next level. Hitting 6 will let you warp.
‹
›
Home
View web version