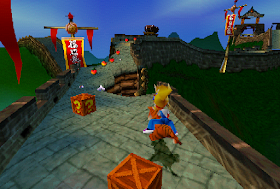 Genre: Action
Perspective: 3rd-person
Gameplay: Platform
Published by: Sony Computer Entertainment America
Developed by: Naughty Dog
Released: 1998
Platform: PlayStation (PSX, PS1)
The third series of the famous Crash Bandicoot - a wonderful platformer, went far enough from previous games. If this crazy Crash has not yet become your favorite idol and has won his place in your heart, this time he will succeed. Game Crash Bandicoot 3: Warped has the best and fun gameplay and level design, not only in comparison with previous series, but also with other 3D platformers. In the game you expect a lot of innovations. A very wide variety of gameplay gives all players an incredible gaming immersion, an experience that you are unlikely to be able to get anywhere else. You do not have to spend a lot of time to understand how often the character of the game is changed from level to level - and not only the situation changes, the ways of achieving the goal themselves change radically, so, in some places, Crash behaves very aggressively, then in some places as in other places he chooses tactics of avoiding contact with the enemy. In addition to the view from behind the back of our furry hero, at almost every level there are scenes of chase. Game options as in the platformer with a scrolling screen, as well as travel on a variety of types of flying creatures. Some levels look completely unusual and unusual, in the previous series you have never seen anything like, for example, such things as flying on a biplane against enemy beetles and bombers, piloting jet skis, and also racing on a motorcycle. These little games inside the main game have a very accurate simulation of the physics of phenomena and are quite amusing in themselves. You will even be able to play for Coco, Sister Crash. I can say more than once that the defining property of this game is diversity, which is very close to the highest quality.
‹
›
Home
View web version