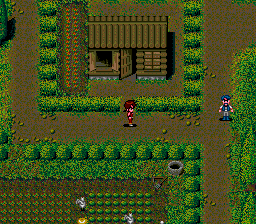 Genre: Role-Playing (RPG)
Perspective: Top-down
Pacing: Turn-based
Setting: Sci-Fi / Futuristic
Art: Anime / Manga
Published by: Working Designs
Developed by: Shin-Nihon Laser Soft Co.
Released: 1992
Platform: TurboGrafx-CD (PC Engine)
The story continues, Van continues to inhabit (and after all flew from another galaxy!) On the planet Idea. But one day, his beloved is kidnapped! But why? It becomes known that Laura is actually a princess and can give immortality to the one who marries her (you'll probably notice an amulet on her neck). So the evil sorcerer Galam and conceived a cunning plan ..It will be necessary to save Laura and as soon as possible! You will not only wander on an island, but also travel between galaxies, even in time!For 1991, it was a masterpiece, even if we take into account that the game did not come out on the improved SuperCD format, but on a simple, so some of the animations had to be sacrificed. But this is also one of the earliest games, where the voice dialogue is involved!So that I just corrected, so it's sound effects and some muzychku.Was also on the Sega CD.In Asia, this game was released as Cosmic Fantasy II - Bouken Shounen Ban.
‹
›
Home
View web version