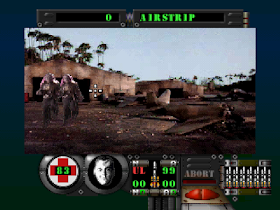 Genre: Action
Perspective: 1st-person
Gameplay: Rail Shooter
Art: Video backdrop
Narrative: Horror
Published by: Digital Pictures
Developed by: Digital Pictures
Released: 1995
Platform: 3DO Interactive Multiplayer
Evil genius, Dr. Hellman nurtures plans to conquer the world with his army of zombies. You, the US Marine, will immediately land on a tropical island with an over secret task - to stop it at all costs! Before you landed, you immediately met with the local "hospitality", in the face of a zombie, flowing with saliva. On your side an attractive reporter and driver - Jamaican rastaman.The gameplay is not much different from other shooters of this kind, like Lethal Enforcers, where the action takes place both in the movies, and there are full-fledged clips between the missions. Going through the jungle, firing off all evil spirits, you collect improved weapons and medicines that will not allow you to turn into a soulless zombie. It is necessary to pay tribute to the acting talent of Vincent Schiavelli, genius played the main villain.Corpse Killer is a game released on platforms such as Sega CD, Sega CD / 32X, 3DO, Sega Saturn, Windows 95 and MAC. Full-motion video is no worse than in other games from Digital Pictures. All versions of the game in principle, nothing differ from each other, except this:
Video quality on the Sega CD is worse than on other platforms.
After the release of the version for the Sega CD, Digital Pictures added the option to include subtitles in English, as many complained that in the versions for Sega CD and Sega CD / 32X it was very difficult to hear what the driver was saying.
3DO. The game supports American Laser Games Gamegun and looks better than the rest, both in terms of video, in terms of detail. The difficulty is higher than that of analogues. It's a pity, you can not beat bonuses, as in other versions.

Shoot the zombies, aiming at them and holding A. The main thing is to kill those who move directly to you or throw skulls and other unnecessary objects into you in time.In the lower left corner - vital energy (originally - 99).The journalist shows you a photo of a man wearing glasses - the main zombie producer, and the TV screens between the game zones allow him to see behind the diabolical work.When you are offered a choice: cartridges or skull, choose a skull - it adds vital energy.To stop the mission, press on C.

If there is a strong enemy, and you have not a single bullet, then, holding A, press B, and the necessary bullet will appear.Switch between the "Satlink" and "Datapod Info" screens when the items you want appear on the map.
To view the ending of the game, select the Zombietown on the map.ControlSecrets.
‹
›
Home
View web version