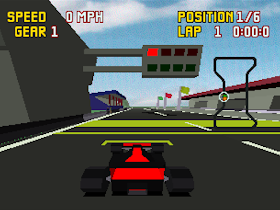 Genre: Racing / Driving
Perspective: 1st-person, Behind view
Gameplay: Vehicle Simulator
Vehicular: Automobile, Track Racing
Published by: Atari Corporation
Developed by: Rebellion Developments Ltd.
Released: 1994
Platform: Atari Jaguar
Game Checkered Flag race in the style of IndyCar performed in polygonal 3D graphics. Something like Virtua Racing Deluxe for the Sega 32X and also for playing on the Hard Drivin Arcade machine. The game for Atari Jaguar is a remake of the same game from the portable game console Atari Lynx and was originally called Redline Racing. Interesting in the game is that in the game you can choose the color of the racing car, the pilot (driver) and set the weather conditions on the track. Unfortunately, there is no support for two players with this version. It was also planned to continue Checkered Flag 2 for Atari Jaguar, but it never came out, as the game version for Game Boy Advance did not come out.
‹
›
Home
View web version