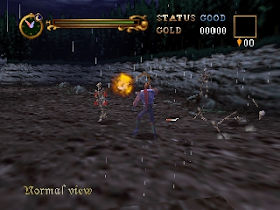 Genre: Action
Perspective: Behind view
Gameplay: Platform, Puzzle elements
Interface: Direct control
Setting: Fantasy
Narrative: Horror
Published by: Konami of America
Developed by: Konami Computer Entertainment Kobe
Released: 1999
Platform: Nintendo 64 (N64)
The first 3D game of the series, Castlevania 64 at first glance may seem unimpressive and even repulsive, since Nintendo 64 can not compete with the power of the PlayStation2 (so do not wait for graphics in the style of Lament Of Innocence), but those who played in the very first Castlevania, it's for sure Do not be scared. In my opinion, there is a certain charm in this game.
The gameplay, oddly enough, is not particularly different from the classic Castlevania, of course, with a correction for 3D. We control one of two characters, the vampire hunter Reinhard Schneider or the wizard girl Carrie Fernandez (Belnedes in the Japanese version). Reinhard is armed with a traditional whip Vampire Killer and a sword, Carrie, of course, fights with magic. Despite the similarity of the order of game levels, there are enough moments in the game when the characters' roads diverge, which can not but please connoisseurs of alternative ways.
Due to the 3Dity on the screen, there are rarely more than three or five enemies at the same time, but it is necessary to jump on platforms a lot and often. With the need for precise jumps and the high complexity of the game is connected, besides life is given only one, but Save-crystals along the road will meet enough and the HP ruler does not decrease very quickly, which, however, is true only for battles with common opponents. In battles with bosses, you have to rely on your own reaction and ingenuity. Of course, there is such a character in the game as Renon, a demon-dealer who will happily sell the player everything he needs, but he still has to get to it, besides, it is strongly recommended not to spend too much money on him (hint: then there will be less problems) .
In addition, the game has a temporary aspect - if you spend too much time, you get a bad ending. Also there is one interesting find of developers: if you are bitten by a vampire (any), you get the Vamp status, because of which you essentially weaken, you can not use holy objects (including Vampire Killer whip) and after a while become a vampire. Honestly, this is the only game I've seen about vampires, where this was possible.
In conclusion, I can say that the transition of the series in 3D turned out to be very successful and the fans got another good game, and the developers themselves are valuable experience for creating the next 3D Castlevania.
‹
›
Home
View web version