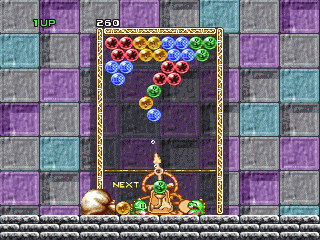 Genre: Puzzle
Perspective: Side view
Visual: Fixed / Flip-screen
Gameplay: Arcade, Tile Matching Puzzle
Pacing: Real-Time
Published by: Taito Corporation
Developed by: Taito Corporation
Released: 1994
Platforms: 3DO Interactive Multiplayer, Neo-Geo, Super Nintendo (SNES)
The bouncy Bust-a-Move game in Japan is known as the Puzzle Bobble for the Panasonic 3DO gaming console. This is an arcade logical game born in 1994 from Taito Corporation and ported to 3DO in 1995 by Micro Cabin. The progenitor of the game is the 1986 arcade of Bubble Bobble, it was from it that all the characters, similar zadar music, moved. From the first minutes of the game, the game is addictive. Pleasant animation and music complements all this. Bust-A-Move is a logical game remotely similar to Tetris and Colorlines. In this game, we will play for the dinosaurs Bub and Bob (or Bubblun and Bobblun in Japan). On top of us will be falling multicolored bubbles, we will be in them to shoot other colored balls. Transformation in one place more than 3 balls of the same color they burst. The main task is to clear the entire playing field from the balls. You can play both alone and against each other, as well as against artificial intelligence. Very fun game.
‹
›
Home
View web version