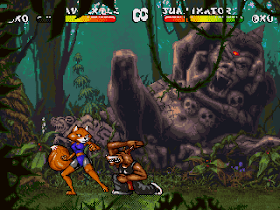 Genre: Action
Perspective: 3rd-person
Gameplay: Fighting
Published by: GameTek
Developed by: GameTek
Released: 1995
Platform: SEGA 32X
Although the game is strong and similar to its predecessor Brutal: Paws of Fury, but in fact it is an extension, that is actually the second part of the game. In the game Brutal Unleashed: Above the Claw - the action takes place four years after the main storyline of the first part of the tournament Paws of Fury. Participants return to the island of Brutal (Brutal Island), which would once again find out who is the strongest of wars and fight with Dali Llama himself for the Belt of Heaven. The tournament is also an opportunity for Lama to check who of the warriors possesses the spirit of the warrior.
The game has significantly changed, the graphics have improved, the animation has become smoother, and the sound has also reached a new level. And basically the gameplay of the game has remained the same, all the same after a successful battle you are trained in a new technique.
Characters in the game remained the same, now you can also play for Dali Llama, as well as two new characters Chung Poe and Psycho Kitty.
‹
›
Home
View web version