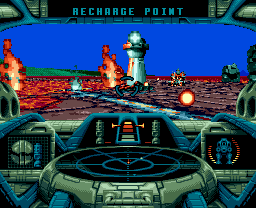 Genre: Action, Simulation
Perspective: 1st-person
Vehicular: Mecha / Giant Robot
Published by: Core Design Inc.
Developed by: Core Design Ltd.
Released: 1994
Platform: SEGA CD / Mega-CD
The actions of the game Battlecorps occur in the future in 2085. Unleashed corporate wars with new weapons, based on "Super Fission" reactors. Powered by the burning of a cold dark flame, in the core of these reactors is the rare extraterrestrial element "Meridium", which was discovered by the Interplanetary Mining Corporation (IMC) on the planet "Mandlebrot's World", located 8 light years from the earth. Soon there was formed a colony with a small number of miners using the newest robot miners and defense equipment BattleBots. But when the bio-computer operating system MOSES (Multicameral Organic Synergistic Energized System), the colony control was infected with a virus that the rival company BioMechanical Incorporated (BioMech) planted on the planet begins hell. MOSES deploys Battlebots against the colonists. BattleBots imprisons the colonists and turns Mandlebrot into a well-armed fortress. IMC immediately sends BATTLECORPS - veterans, hardened battles Corporate Wars. Warriors go on assignment in Armordillo-Class - Bipedal Attack Machines (BAM). They must return the planet.
As you can see from the plot of the game, you have to control a robot, like a robot from the game Front Mission for PlayStation. You have to go through 13 levels in order to remove the virus and restart the computer. The game for the gameplay and its 3D graphics is somewhat similar to the T-MEK game for the Sega 32X.