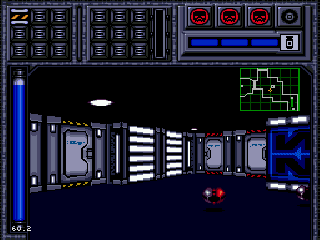 Genre: Action, FPS
Perspective: 1st-person
Gameplay: Shooter
Setting: Sci-Fi / Futuristic
Published by: Domark Group
Developed by: Domark Group
Released: 1994
Platforms: SEGA Genesis / Mega Drive, SEGA CD / Mega-CD
Since the advent of DOOM for IBM PC, every new DOOM similar game is taken to compare with this standard of the genre. But, although for SNESa released a pretty decent and almost uncut version of DOOM, for a slightly inferior "Super Nintendo" for a number of parameters SEGA Genesis such a feat is hardly possible. And yet, to each self-respecting owner of the sigepodobnoy prefix probably first-hand known in 1994, a little-known company Technopop with the participation of Accolade product, code-named Zero Tolerance, which has already been described in the 26th issue of the magazine. Despite the small size of the game screen and the planar construction of stages, the dynamism and reality of what is happening, "Zero Tolerance" is not much inferior to all the beloved "D", although it is not competitive in matters of animation, detail graphics and musical accompaniment. So, it turns out that the same year two more veterans of the gambling business, Domark and Acclaim, carried out another project of the game "action movie with a view from the eyes1", which for several reasons was not so popular in the market of mega-games. Perhaps this description will restore justice, because, in my opinion, Bloodshot is not only in no way inferior to its rival, but it even surpasses something, at least, by complexity.

Gamepad - move forward, backward and turn to the side.
A - opening the door in the visibility zone, 'is performed when the button is released.
A + sideways - step to the side without turning, irreplaceable in combat movement. To make a step just to the left or to the right, rather than diagonally, disable the menu item diagonals.
B - shooting from the chosen weapon (it is better not to use the turbo-button).
C - change of weapons, if there is an alternative.

Almost all weapons in the game generate laser charges of varying power. In parentheses, after the name, ammunition is indicated and, where possible, the number of shots required to defeat the player (in the case of a multi-barrel weapon, provided that the volley is fully hit). Reference information on the number of trunks and the following enemies can be found in the next issue of the magazine.
MTX 9X1, explosive grenade with radio control. The genius, in the opinion of the creators, is a weapon, yet it is unnecessarily tricky to manage. In the heat of battle, you somehow forget that you do not have to press the turbo button, but the usual one, and let go, only when the released grenade-disk reaches the enemy. The charges (7 pieces) generated by the explosion caused by the radio are scattered at a wide angle, but the shot is equivalent to five standard charges. But ... Weak rate of fire and small ammunition - only in the hands of a well-aimed arrow this "mortar" will bring the expected effect.
GRENNA-KIL, grenade launcher. Grenades fly a fairly long distance, but be careful not to shoot near the target - an explosion can also hurt you. And do not expect to receive a bonus ...
MegaFluxll. "local reactor". The most powerful weapon, it is found only in hiding places on the last levels. Like the BFG-9000 in the Duma, it is a weapon of mass destruction, inflicting heavy damage to all enemies in the zone of defeat. But the proximity of infernal rifts can also damage your health.
LOCKON ZERO ONE, blaster with a laser sight. Charges of average power from this gun will find their own goal, if it does not move too fast ...
6K WEAPONEX, plasma torch! The power of this gun is due to the high penetrating power of the charges it produces. A calculating player can hit the enemy through the walls and bodies of other fight participants!
r40-40, semi-automatic pulse rifle. Weak, but quick-fire weapons with a small degree of scatter of charges.
RB101, deflector of "elastic" charges. Long-playing fireballs from this gun bounce off the walls, but not from the enemy.
s60-60, plasma rifle with a wide zone of damage. A quick-fire weapon, due to the scatter of charges, is capable of attacking several enemies simultaneously.
As the name suggests, this "exhibit" shoots three charges at a small angle at the same time. The effect is the same as that of s60-60, but more noticeable and reliable.

From level to level, you will be greeted by increasingly sophisticated types of enemy vehicles. Here is their incomplete list. In parentheses, after the name, the average power of the guns is indicated (how many volleys of them are required to defeat the player) and armor (the number of hits from the standard laser) of the enemy.
Android, a two-legged erect robot. There are three types: The first shoots something spiked, with a pause after hitting. In the later levels, there are more identical robots with more (about 9) armor. The second  is armed with a standard laser. He, if you're lucky, you can take one shot. Bonus for them usually do not give.
Armored wretch, also shoots thorny charges.
A cyborg on a flying platform. It uses the same method of attack, but at the same time it smeared a rare
Muscular two-legged cyborgs. Though armed with a cannon, they prefer to generate a sort of ricochet'ovskih charges by a relief belly. In addition, use a protective field that reflects all charges, except grenades and plasma.
The most powerful robot, depicted on the cut scene, can be nice to patch an awkward player. Apparently, each of its three parts is considered a game as one robot. Over time, you will learn how to use ordinary weapons to rake in a single heap of flesh and metal with a whole bonus! But it is better, of course, for this case to use a cannon more ...
Robot class BATTLETECH! Armed with spiked charges and a standard-power grenade launcher. The best tactic of battle: to entice the enemy to the column or door and stand behind it. A stupid piece of iron will sort itself out for spare parts.
Plasma robot. Nothing special.
Security droids.
Fly around the trunk of the reactor, attack infrequently. It is easier to destroy if you shoot along the tangent to the orbit.
The trunk of the reactor.
Shoots often, randomly.