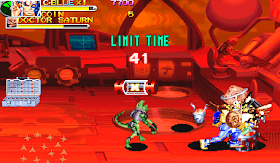 Genre: Action
Perspective: Side view
Visual: 2D scrolling
Gameplay: Beat 'em up / Brawler
Setting: Sci-Fi / Futuristic
Published by: Capcom Co.
Developed by: Capcom Co.
Released: 1997
Platform: Arcade Machine
The game belongs to the genre of side-scrolling beat'em up, in which you have to destroy the wily plans of Dr. Saturn and save the world. On the choice you are given 5 characters of essentially different each other, each of which is interesting to play in own way. Visually the game looks great: great animation, colorful special effects. The main feature of the game is the accumulation of fighting skills, namely you have to shake out money from enemy pockets and spend it on your own needs, i.e. to get some shock, well, or life. You also have the opportunity to stay on stage as much as four, which looks pretty fun. In addition to the massacre, you are invited to get involved in the pursuit of a boss on a cyber bike or to escape from the impending meat grinder, which looks quite fascinating.
‹
›
Home
View web version