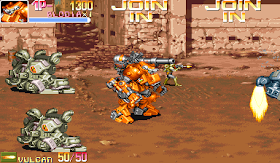 Genre: Action
Perspective: Side view
Gameplay: Beat 'em up / Brawler
Vehicular: Mecha / Giant Robot
Setting: Sci-Fi / Futuristic
Published by: Capcom Co.
Developed by: Capcom Co.
Released: 1994
Platform: Arcade Machine
Quite an interesting beat'em up, where you have to wear heavy armor robot equipment. There are 4 different modifications of robots from light to heavyweight, naturally with their weak and strong sides, each of which is piloted by a certain character. An interesting detail of the game are additional items, namely spare parts that can be installed on their mechanical armor after the destruction of the enemy robot, otherwise you can during the battle to chop off your limb, then you will have to try someone's nearest, and you'll have to run around with one , to be more precise, the replacement is absolutely everything, which in turn completely changes the entire gameplay. In addition to the extremities, a weapon attached to the body is to be replaced, it is very useful when a fight with a large boss surrounded by an equally weak retinue is to be fought. Visually, the game is well formed: everything crashes, explodes, parts of robots fly in different directions, in general, beautiful. With each level it becomes more and more tightly in the stages, because robots become more and more, and the sizes grow in direct proportion to their number, so that the destruction becomes more and more, and it's more and more interesting to play.
‹
›
Home
View web version