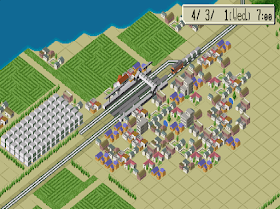 Genre: Simulation
Perspective: Bird's-eye view
Visual: Isometric
Gameplay: Managerial / Business Simulation
Vehicular: Train
Published by: Maxis Software Inc.
Developed by: Artdink Corporation
Released: 1996
Platform: PlayStation (PSX, PS1)
Extremely interesting isometric strategy, which, in spite of the short name, is very, very diverse.
Some might think that this is a "clone" or, in extreme cases, the "forerunner" of the Sid Meier masterpiece called Railroad Tycoon, but in fact it is by no means the case. A-Train is a bright and original game, the only game that offers you to create a city, the main city of which is a railway company.
As the head of this company, you need to solve two main problems: the development of the business itself (that is, the increase in profits from passenger and freight traffic on trains) and the development of the city under construction, whose economy, though based on the capabilities of your business, but still (in your opinion, apparently, desire) should be developed and multi-layered (by the way, for me the status of the player remained incomprehensible: apparently, he is also the head of the company, and if not the mayor, at least, "special, close to" ).
The game begins on an almost empty territory, where there are only rare rural houses and one railway. It is with the development of the "core" industry that we should start, with the main attention paid, of course, to passenger trains (detailed on-site: setting the prices for tickets, scheduling routes, train schedules depending on the time of day, etc.). But then it is necessary to deal with the city itself. Here, as already noted, the difficulty is that it is difficult to understand the limits of our "powers" in this area: formally, it seems, one can (at least initially) only "stimulate" the development of the city, which is directly related to our revenues ( that is, people understand that our company has a job and are ready to live in the city), as well as with the laying of routes for freight trains that will carry to the territories where construction is possible, various resources for the erection of buildings and structures for various purposes i. By the way, there is an interesting "diabolical" chain: the more we invest at the beginning of the game in the "commodity" routes, the more (and sooner) whole urban areas will appear, the more people there will settle there, the more, therefore, will we have potential passengers for our trains - ours, if you have not forgotten, the "main" work. The money invested in the development of the city, thus, is fully paid off (but this does not mean that you can not get into the minus or lose in the game).
It is impossible not to mention that the game allows "intellectual perversion." For example, you can spend money on paving the way for some wilderness, in which a suburb will eventually appear. And then, because people from the suburbs need to work somewhere, turn up such prices for tickets from the suburbs to the city, that the constructed way will not only pay off, but also bring profit. That is, the scope for fantasy is great, but operations like those described are rather risky.
As the city develops, other entrepreneurs will appear in it (and soon enough), which will begin to provide residents with what they need: food, entertainment and other things. After all, "not by transport alone" ... Here you can also "get in" and enter into a competitive struggle: there is nothing to prevent the opening of any company in the city that is not connected with the railway (by the way, the competition in the game in this respect is quite amusing, and success depends on many factors). And soon there will be a stock exchange on which it will be possible to "play", and this is also money.
Finally, the city itself (and at some point the city grows so that it takes 99% of your attention). The game is old, the buildings are of the same type (although there are of course their kinds), there are no people or cars on the streets. But the city does not look dead. Because, firstly, the game has a change of day and night (the night city, especially developed, with skyscrapers, shining myriad of lights - an amazing sight), and secondly - the change of seasons (you can quite see your city with snowdrifts on the streets ). It's not worth talking about the chart itself: it's wonderful. Let the game objects and do not differ in variety, but the rendering is beyond praise. The isometric perspective here is very pleasant and convenient, and the interface of the game itself is quite convenient - quite extensive, but understandable.
Summarizing, we can say that we have a completely undeservedly forgotten interesting economic simulator, successfully combining the ideas of SimCity and Railroad Tycoon. If you miss the "smart" and original economic games and want to relax from endless wars, then this game you will certainly enjoy.
‹
›
Home
View web version