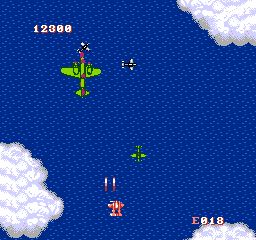 Genre: Action
Perspective: Top-down
Visual: 2D scrolling
Gameplay: Arcade, Shooter
Vehicular: Flight / Aviation
Setting: Historical Events, World War II
Narrative: War
Published by: Capcom U.S.A.
Developed by: Capcom Co.
Released: 1988
Platform: Nintendo (NES)
"1943: The Battle of Midway" (known in Japan as "1943: The Battle of Valhalla") is the continuation of the famous 1942 game that Capcom released three years after the first part of the game was released.
"1943 - The Battle of Midway" is an example of a good sequel: innovations in moderation, nothing superfluous. The developers slightly changed the graphics and made more variety in the gameplay. The parameter "energy" is added, fulfilling the role of the scale of life, which, like fuel, decreases with time. Also, a little bit of vitality will be taken away from you when you hit a bullet or the enemy itself, as well as when using a special weapon. There was a possibility of pumping a stormtrooper.
Now the player will not just wade between aircraft carriers, but destroy quite a variety of enemy aircraft. During the game the stormtrooper can descend to a lower altitude and shoot enemy flying there. The Japanese flotilla was added, which can be destroyed by methodical shooting of all guns on its board.
Developers coolly embellished the game, and now we can observe pretty backdrops with clouds instead of dull islands against the background of the blue sea in the first part of the game .. True, now some enemy aircraft entering the peak have become more difficult to discern on their background. The game became more dynamic due to the increase in the speed of the player controlled by the player, and the enemies became more intelligent. There is one more innovation - by pressing the "A" button, we perform a super blow that sweeps away all enemies within the game screen. Disappointed only that the developers have removed the possibility of playing together.
Subsequently, the game "1943: The Battle of Midway" was released for many other gaming systems: Amiga (1988), Atari ST (1988), Amstard CPC (1988), Commodore 64 (1988), ZX Spectrum (1988).
‹
›
Home
View web version